Defining Femicide and its Implications in the Americas

Can legally defining crimes against women help deter violence against them? It might be a good start. Following in the footsteps of many other countries in the Americas, Colombia is taking steps to set guidelines to prosecute these types of homicides. In late September of 2014, members of congress proposed a bill to define femicide, which is the murder of a woman by a man based on her gender. Of the 637 women killed in Colombia so far in this year alone, 83 were considered femicides – government figures show.

To gain more attention to the issue, just last week, the president of the Inter-American Commission on Human Rights, Tracey Robinson, unexpectedly came to Colombia to bring light to the issue that crimes committed against women continue to remain in exemption. Her visit came as a surprise but that was her intention.

“In an interview with El Pais newspaper, Robinson said the surprise visit was meant to be just that. “That was the point. Arrive without notice so that more than one person who wouldn’t dare to tell their case because they didn’t know how to do so could do so. This is the opportunity of the IACHR to know up close the situation of afro-colombian women and the LGBTI community,” Robinson told El Pais.” 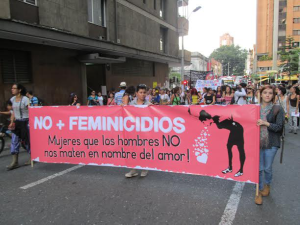 “No femicides. Women, do not let men kill us in the name of love.”

Femicide is a widespread problem in Latin America, and more than half the countries with the highest femicide rates are in the Americas. Crimes against women are pervasive and have not been well documented in the past, and this new classification hopes to draw more attention to this issue.

Within this issue lies the assumption that defining these crimes will bring awareness to the problem and bring justice to victims. These crimes have gone mostly unnoticed in the past which may be a reason why this new bill might deter potential criminals from committing these acts. Furthermore, The definition of femicide itself is relatively new, and has not been formally used in political discourse in the Americas until the past decade, which may be due to gender changes in the political landscape of not only Colombia, but other countries in Latin America as well. 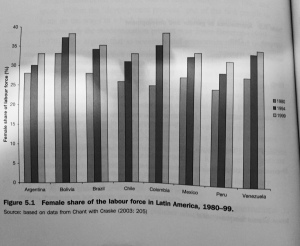 Female policy makers were behind the creation of the bill in Colombia, and this could be in part that women have risen to power in government in the Americas over the past 30 years. Their personal perspective draws attention to female issues policy that have not been addressed before, and  there is hope that they will create equity and empowerment for women in the legal system.

There is no definitive way to measure the power of a word, but it’s increased awareness might be a good start to deter femicides throughout the Americas. This push from the international community and from policy makers within countries is a step in trying to reduce crimes against women in general.

Since the bill to define femicide is being proposed by female policy makers, there is hope that crimes against women will hold more weight in the courts, and hopefully deter criminals from committing them.